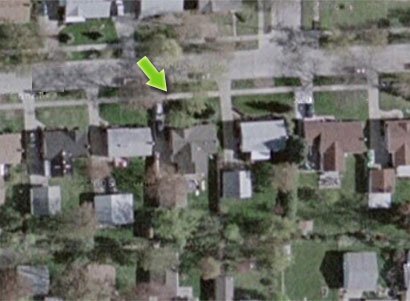 While wandering around the world viewing different blogs about web design and accessiblity, I stumbled upon an article over at David’s Doodles. On David’s contact page was an overhead view of the apartment complex where he lives.

I thought it was a novel idea to show an actual satellite view of his home. That prompted this post, and the rest is history. This map overview shows where I live in Rochester, MI USA.

Rochester is a town of 12,000 people located in Oakland County, Michigan. Our county borders the City of Detroit to the north. One of the unique features of Rochester is that it maintains an historical downtown business district, which serves to give the city an identity that is lacking in most suburban cities. We can walk from my house to the downtown area, where just about anything we want or need can be purchased or enjoyed.

My wife and I have lived in Rochester since 1982. We both grew up in the City of Detroit, and when we decided to move we wanted to find an area that had many of the attributes of a large city, but without the pitfalls that large cities often have. We settled on Rochester and we are glad that we did. We raised our family in the community school system and have no intentions of moving. We really enjoy it.

One of the best features of the area is a series of abandoned railroad beds that have long since been converted to scenic trailways. When I walk the dog in the morning I leave the city behind when I hit these trails. It’s the best of both worlds. City living with country amenities! Sometimes I take my camera along on these walks and try to capture what the day was like on my morning stroll. On January 16, 2007 it was dangerously icey, but it sure made for a great photo!

Where Do You Live?

Where do you live? I don’t want to just hear about where you live, I want to see it on a map. From outerspace. Compliments of Google Maps or some other satellite service. It’s a miracle that it’s possible to see our homes from outerspace, isn’t it?